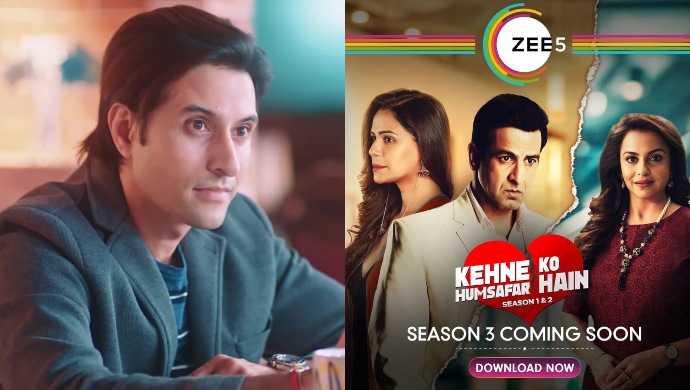 Portraying the real picture of broken hearts, relationships and families, Kehne Ko Humsafar Hain is a romantic-drama series, streaming on India’s largest OTT platform. With its two seasons received remarkably well by the audience, Season 3 is slated to release on 6 June 2020. Starring Ronit Bose Roy, Gurdip Punjj and Mona Singh in lead roles, the show launched on Zee TV on 25 March 2020, as a substitute during the COVID-19 pandemic, when production had to be stopped. Taking you through #RishtonKiUljhan and intense emotion, it also stars Apurva Agnihotri as Harry Somani, a millionaire businessman who loves Ananya Sharma. Read the exclusive interview of the actor further.

1. Firstly, as a millionaire, Harry Somani, do you believe that money can buy happiness?

Hmmm! Well, money can buy motorcycles and I’m a huge motorcycle fan! And being on a motorcycle, riding a bike makes me really happy, So, I would say, yes, to some extent, money can buy happiness. In a relationship, if a girl and a boy fall in love and all of a sudden money stops coming in, then all the love and affection goes out of the window. Yes, money is very very important but it’s not the only thing. There’s a lot of other things that keep a relationship going ahead and to be happy.

2. Your love interest in the series is Ananya Sharma, a married woman. Would you wait for her in real life too?

In real life, if she is married to someone else, I don’t think I’m going to opt for such a person. Because a lot of complications come along with that. I wouldn’t want to go for a woman who is just coming out of a relationship, because you don’t really know if she’s truly in love with you or she’s just bouncing off her past memories. And honestly, I like my life to be fairly simple!

3. How do you and the audience relate to Harry’s character in the series?

I’m nowhere close to Harry in real life. But in certain aspects, I’m a bit like him. I wish I was as rich as him! See, Harry, in a way, is very simple, stupid and happy-go-lucky kinda guy, which also I am in real life. The relatability quotient of my character with the audience is mostly just about having fun. I’d be glad if they wish that Harry and Ananya end up together, which they did in the past. And if they learn a bit about life and relationships.

4. The show revolves around broken families and infidelity. Has this aspect of marriage or family ever impacted you?

Not really. Real and reel life are two different things and they should be kept separate. On-screen, we end up playing a lot of negative characters like murderers. But off-screen, we can’t say that okay I’m going to be mean to people because I like to be a villain. So, that’s my work and I just keep it away once pack-up is announced. I get out of the character and come back home as Apurva.

5. How is your equation with Mona Singh (Ananya) and other cast members as co-stars?

Luckily, I have an excellent, excellent, excellent rapport with Mona. 95 to 98 per cent of my scenes are with her. She is pretty easy to work with. And for the rest of them, I think we couldn’t shoot with Ronit da because I was travelling and then this lockdown happened. So, we had to finish the series. But with Mona, it’s amazing. We give and take along well. We understand each other. We know how we would react.

6. What new have you learnt from playing Harry between Ananya-Rohit’s relationship?

Haha! I think Harry needs to learn from me! I think he should not go after married women and stick to one woman for the rest of his life (laughs). Well, there’s nothing much to learn from Harry ya! He is just simple, stupid, and sweet. One thing I’ve taken from him to maintain my sense of humour, no matter what’s happening in life. Even if the situations are bad and dark, he yet smiles and laughs at it.

7. Other than Harry, what characters and genres would you like to explore on an OTT platform like ZEE5?

I don’t want to play a rich guy anymore. I want to do something which is in complete contrast with my personality and character. Maybe somebody from a village or from a city like Kanpur. I’ve done negative characters but I’ve never played a gangster. I want to perform a raw and rustic character. Also, I would love to write and direct. My father was a writer and he wrote films for Amitabh Bachchan and Madhuri Dixit. So, being behind the camera is also pretty exciting. I love taking photographs. I’ve just started penning down my thoughts in the lockdown. It’s a beautiful feeling and I feel like a mother to imagine how characters come to life, enact situations and deliver lines that you write for them.

That’s because there’s no show like Kehne Ko Humsafar Hain. Almost every other show is probably is a remake of something else. It’s all gangsters, underworld, giving gaali (profanity) or religious otherwise. This show is a nice up-market one with a great ensemble cast. It actually depicts real life, true love, ups and downs, good and bad situations, divorces, heartbreak, and much more realistic stuff.

Stay tuned for Season 3, dropping on 6 June 2020. Till then, binge-watch Season 1 and 2 of Kehne Ko Humsafar Hain only on ZEE5.