Sonam promoted The Zoya Factor with Dulquer Salmaan on DID while Ayushmann Khurrana and Nushrat Bharucha visited to spread the word about Dream Girl. 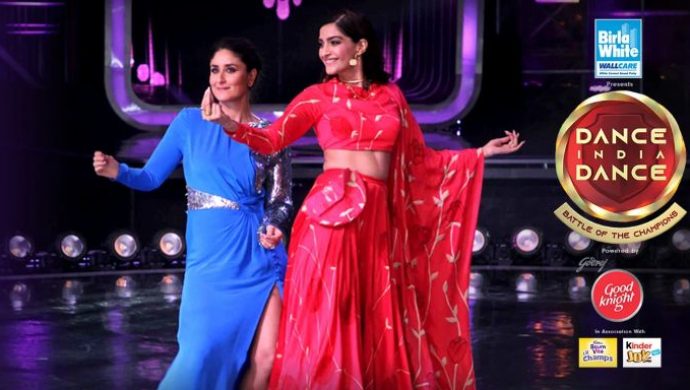 BFFs Kareena Kapoor Khan and Sonam Kapoor Ahuja, who starred together in 2018 blockbuster Veere Di Wedding, had a VDW reunion on the sets of Dance India Dance 7: Battle of the Champions last week. The entertainment forces boast of a long-standing friendship and go way back before VDW. Picking up right where they left off, Kareena and Sonam danced to their chartbuster Tareefan, played Dumb Charades and revealed some cute things about each other. In all, the episodes of 14-15 September 2019 were packed with tons of fun, masti, and dancing.

For those not in the know, Kareena made her television debut as a celebrity judge on Zee TV’s dance-based reality show Dance India Dance. Sonam, who awaits the release of her next film The Zoya Factor, visited Bebo’s show with co-star Dulquer Salmaan to promote her upcoming movie. If the Jab We Met star’s blue and silver Prabal Gurung was a show-stealer, Sonam’s red floral crop-top and flowing skirt combination was a complete stunner. Besides Sonam-Dulquer, Ayushmann Khurrana and Nushrat Bharucha marked their attendance too on the show. The duo graced the show with their funny antics and dance performance as they promoted their film Dream Girl. We are totally digging the Akaash Vani star’s look for DID, btw, see pictures here. Check out all the major highlights from the latest episodes here:

1. Kareena and Sonam reveal who is more aware of industry gossip

We bet you were expecting this reply!

After watching Sonam's gesture, you'll call this game 'BUM CHARADES'! 😆 Can you guess the movie❓ Tune in to #ZeeTV this Sat-Sun at 8 pm to watch these epic moments of Kafee Kuch with Karan on #DanceIndiaDance – #BattleOfTheChampions. #DanceKaJungistaan #KareenaKapoorKhan #SonamKapoorAhuja #DulquerSalmaan #Bosco #Raftaar #KaranWahi

Can you guess the name of this fil? Hint: It stars Akshay Kumar.

3. How many Tareefan for Kareena and Sonam’s dance performance?

The actresses brought back memories of VDW.

4. What happened when Poo met Pooja? Find out here:

Who do you love more – Poo or Pooja?

5. Bhawna Khanduja sets the stage on fire with her contestants

Don't forget to blink 👀, this fantastic illusion by the Unreal Crew can hypnotize you! Tune in to #DanceIndiaDance tonight at 8 pm to watch this amazing performance only on #ZeeTV. #DanceKaJungistaan #BattleOfTheChampions #KareenaKapoorKhan #Raftaar #Bosco #KaranWahi #NorthKeNawabs #SonamKapoor #DulquerSalmaan

The mentor definitely stole the spotlight from her students in this one!

6. You’ll be dumbfounded after watching this performance by Akshay Pal and Paul Marshal

Who says you need a song full of beats to do popping! Tune in to #ZeeTV tonight at 8 pm to watch Paul and Akshay's mesmerizing performance. . #DanceKaJungistaan #BattleOfTheChampions #KareenaKapoorKhan #Raftaar #Bosco #Karanwahi #WestKeSinghams

7. Pranshu and Kuldeep dish out a heart-warming performance on ‘Baba’ from Ventilator movie.

These boys tug directly at our heartstrings, every time.

Stay tuned for all the updates from Dance India Dance 7. Don’t forget to share your favourite performance from last weekend’s episodes in the comments box below.

If you missed watching the latest episodes of DID 7, catch them now here:

In the meantime, watch Akshay Kumar’s 2016 film Rustom on ZEE5, based on the Nanavati scandal.