In tonight's episode, Guddan steals a bike to save AJ and stop him from marrying Antara. 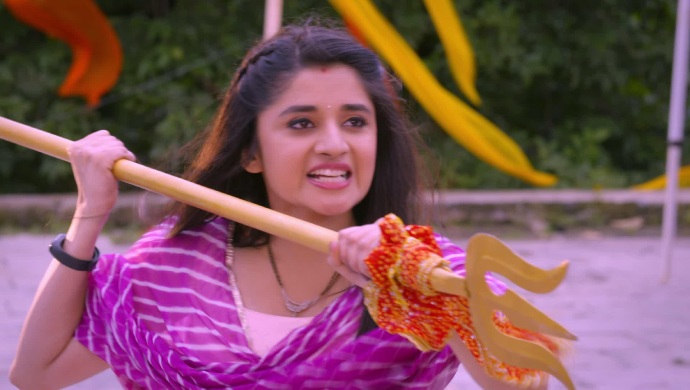 In the previous episode of Guddan Tumse Na Ho Payega, Antara calls up Guddan and informs her that AJ and Angad are in trouble. However she tells Guddan she can save only one of them since they are kept in opposite directions. Guddan leaves the house and decides to save Angad first. Menawhile Antara continues her wedding with AJ. Guddan finds Angad trapped inside a wall. She breaks down the wall and saves him before going to save AJ

In tonight’s episode, Guddan runs towards the temple to stop AJ’s wedding. She realises that she will not make it in time. Guddan sees a Ganpati visarjan passing by. She sees a man get down from his bike to pray to the Ganpati idol. Guddan sees her chance and steals the bike to go and save AJ.

Meanwhile, Antara tells AJ that their saat phere has started and Guddan is not there yet. AJ believes that Guddan will be there soon. Just as Antara and AJ are taking their last phera, Guddan parks the bike. She takes a trishul and attacks Antara. Guddan lets Antara run away and tells AJ that she loves him.

Antara creeps up behind Guddan to attack her with the trishul. AJ notices this and stops Antara. Guddan ties up Antara and forces her to watch her get married to AJ. Guddan once again puts sindoor on her forehead by AJ. Antara says this is not the end. Guddan and AJ don’t believe her and let the police take her away.

Revathi sees the time Antara gave is over. She is worried since AJ, Angad and Guddan all have not reached. Guddan calls up the house and tells them that Antara is arrested and everyone is safe. Daadi says she will give Guddan a newly wed bride’s welcome when she returns. Will Antara return for revenge? Stay tuned to find out.