In tonight's episode, Alisha offers Guddan a glass of wine and challenges her to drink it. Will Guddan give in to Alisha's challenge? 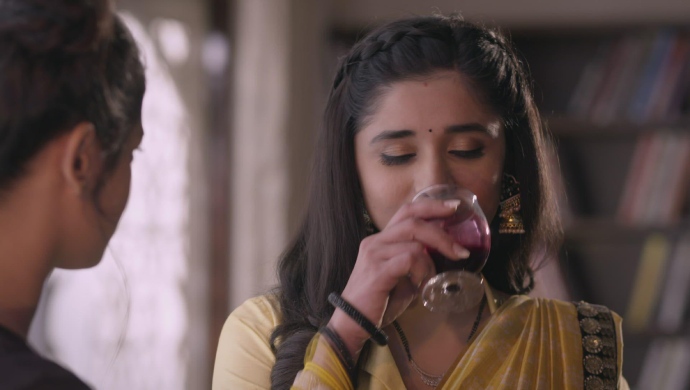 In the previous episode Guddan Tumse Na Ho Payega, Guddan promises to let AJ win Alisha’s trust. AJ goes to ALisha’s room and tries to explain his side of the story to her. However before AJ can reveal Antara’s truth, Guddan interrupts AJ. She tells him that Alisha is not yet ready to believe him. She asks him to wait till Alisha actually trusts them. Guddan prepares food for specially for Alisha along with the entire house by herself

In tonight’s episode, Alisha makes fun of Guddan’s efforts to build a bond with her. Alisha says that in jail she never got to eat in glass plates. Guddan brings out steeel thalis to eat. Alisha takes the rotis from everyone’s plates keeps the thali on the ground. She tells Guddan that it is to give a real jail feel.

Alisha tells Guddan that if they want to eat they will have to fight for the rotis. She asks anyone to take away the plate of rotis and Guddan steps forward. AJ tries to stop Guddan saying they should not encouraga this nonsense from Alisha. Guddan goes to Alisha and Daadi asks AJ to calm down.

Guddan and Alisha play a game of ‘Dog and the Bone’ for the rotis. Guddan not only manages to take the rotis before Alisha but also leaves Alisha fallen on the ground. She asks Alisha to sit with everyone and eat but Alisha leaves. AJ says he doesn’t understand why Guddan is doing anything Alisha wants.

Guddan says she is doing this only to bond with Alisha. Later, she sees Alisha pouring wine in a glass. Alisha asks Guddan to drink a glass as well. Alisha is shocked when she sees Guddan drinking. When Guddan drinks she realises that this bottle is filled with fruit juice. Guddan wants to know why Alisha is so angry.

Alisha says that she will not be happy till Guddan leaves her father, AJ. She says that AJ will always choose his daughter over his wife so Guddan has no chance to win either. Later, Alisha calls her guy friends home for a party where they dance in front of the entire Jindal Family. Watch how AJ reacts to this party in the next episode.