In tonight's mahaepisode, Guddan's blouse opens while dancing against Antara. Lakshmi tries to figure out Antara's plan from Saraswati. 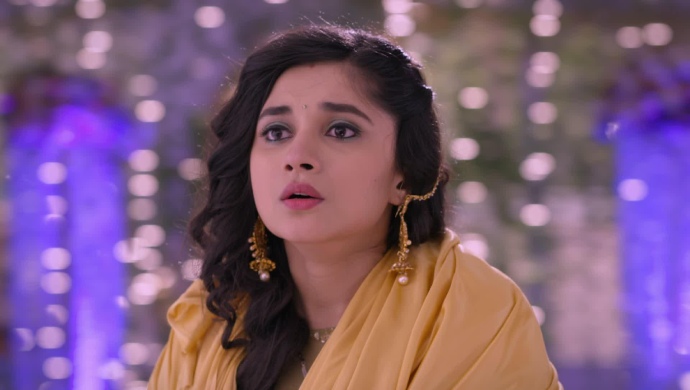 In the previous episode of Guddan Tumse Na Ho Payega, Guddan makes Antara jealous by talking to Tanwesh Handa on the phone. She goes to Guddan’s room and tears her ghungroo to spoil her performance. Durga finds out that Antara was in Guddan’s room and tries to find out what she was upto. They notice the problem with the ghungroo and fix it. AJ leaves the sangeet ceremony saying he has work. He returns dressed as Tanwesh Handa. Antara tells Saraswati that she has messed with Guddan’s blouse so that it opens during the party.

In tonight’s mahaepisode, Guddan tells Antata that she knows she was meddling with the ghungroo. Antara doesn’t react shocked or surprised. Guddan is convinced that Antara has another plan. She asks Lakshmi to keep an eye on Saraswati to find out what plan Antara has in mind.

Saraswati is already felling guilty about that Antara is doing to Guddan. Lakshmi shows up and tells Saraswati that they can plan all the wants Guddan will win. Saraswati tells Lakshmi that winning or losing won’t matter if Antara’s plan works. However, she doesn’t answer anymore questions since she thinks Antara will kill her.

AJ shows up as Tanwesh, Guddan and Antara decide to start the dance they prepared for him. Seeing Guddan dancing, Saraswati leaves the room in fear. Lakshmi follows her and hears her mumbling about what they did with Guddan’s blouse. Lakshmi decides to go out and inform AJ but Saraswati hits her head knocking her out.

Meanwhile, few buttons from Guddan’s blouse have already opened. By now AJ is also dancing with them. When AJ dances Guddan he feels the love between them which distracts Guddan too. Lakshmi wakes up in time and texts AJ and Durga about Antara’s plan. AJ wraps a cloth around Guddan just as her last button pops.

Leaving Guddan’s side, AJ imagines walking up to Antara and slaps her. He even reveals Tanwesh’s true identity. He realises that it would mean Antara refuses to sign the property papers. Guddan calms AJ down and blames the blouse of being low quality. Antara wonders how Tanwesh found out about her plan at the last minute.

AJ says he will stitch Guddan’s blouse. Guddan refuses to let him do so. AJ tells Guddan that they are still husband and wife and he wants to fulfill his duty of a husband even though they are fighting. Guddan lets AJ stitch her blouse back. Will this re-create the romance between AJ and Guddan? Stay tuned to find out.