In this episode of Guddan Tumse Na Ho Payega: Guddan and AJ play a quirky game of truth or dare and they reveal some truth. 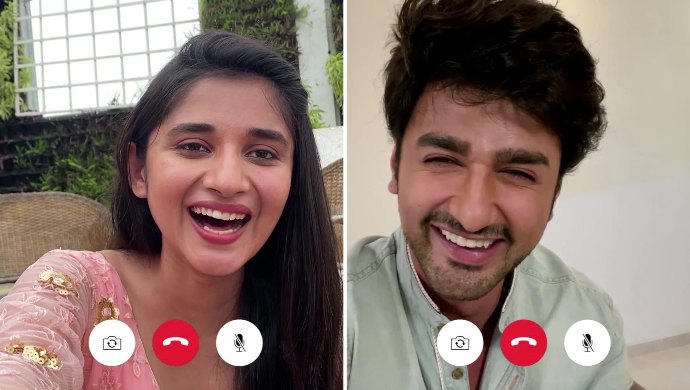 In the latest episode of Guddan Tumse Na Ho Payega-Ghar Se, we see Guddan, spinning a bottle and sending it to AJ, who then calls it a confusing message and calls her back, she then calls him old fashioned and he is perplexed and he asks her what is the connection between the bottle and his age, then Guddan tells him she wishes to play truth or dare with him, AJ who is cooking something still looks stunned and then Guddan asks him what has he been cooking, he tells her he is cooking AJ’s special Pakoda which even Guddan loves, then he asks Guddan to play an honest game of truth and dare.

Guddan and AJ start spinning the bottle, its Guddan’s turn, and she chooses dare and AJ calls her gutsy, she then responds saying that she never overthinks, she lets others do that after that AJ dares her to shout “I love you Jindal Sahaab” to which she responds why is he stuck on I love you and he then taunts her about her confidence to which she shouts “I love you Jindal Sahaab” and neighbours come over and she then reasons it out by saying, she sat on the remote to which AJ laughs, then its AJ’s turn and he also chooses dare and she dares him to striptease, and he starts opening his shirt she gushes and makes him stop and calls him hot.

In the next question, AJ asks her the truth and Guddan very dramatically answers she will say nothing but the truth and AJ calls her a drama queen. AJ then goes on to ask her was she ever so upset that she felt like leaving him to which she cutely replies that there were instances where, she was extremely angry on him but, she definitely feels more love than anger for him so she never felt like leaving him, she remembers the time when AJ had made her sign a contract for selling his shares and she got extremely mad at him because he chose Antara instead of her, AJ then recalls that and calls her stubborn too which she reminds him of instances where he was also extremely stubborn, case in point being apologizing to Guddan in the middle of a wedding.

Then Guddan asks him what would he like to choose, truth or dare to which he replies just like in life he has been following Guddan’s footsteps in the game too so, he chooses truth, Guddan then asks him, when was the time he realized that he was in true love with Guddan to which he smiled and said that is extremely easy and reminds her of the grand gesture he made for her to which Guddan replies that did it take him so long to realize to which he responds that it just took him a long time to express, he realized it very early on that he is in love with her, then she teases him saying, how could he fall in love so early.

Kundali Bhagya: A Look At Preeta Arora’s Style Transformation On The Show

Bahu In Focus: Archana Of Pavitra Rishta Is The Best Example Of A Strong Indian Woman

Exclusive: Javed Jaffrey Aka Bittu From Never Kiss Your Best Friend Is A Hopeless Romantic