These episodes have a very important lesson about happiness, respecting mother nature, and the strength of friendship. 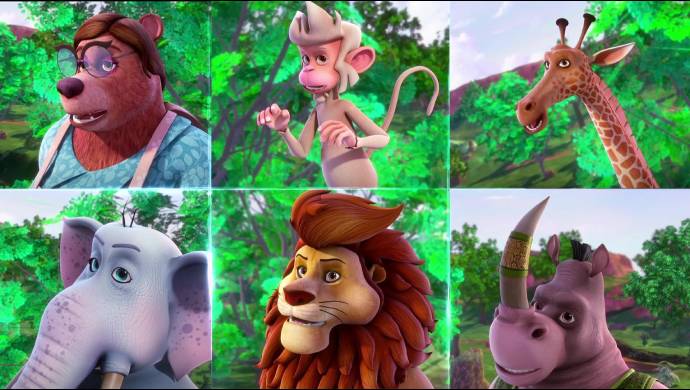 In the latest episode of the ZEE5 #NonStopBachFUN series, Guddu will be seen meeting a ghost face to face! How scary is that? Guddu and his friends head out driving to the next town for a circus performance. Along the way, their vehicle breaks down. The night is scary and Balloo is driving but he suddenly stops as there is a tree lying in front of them. They all try to push the tree away but the tire becomes flat. Suddenly out of nowhere, a goat Bhatakna comes to them and tells them that he would help them. Guddu asks him about his whereabouts suspiciously but Bhatakna ignores his questions. He tells them that he would help them only if they perform the special circus for him.

Watch the episode of Guddu here.

Bhatakna takes Guddu and his friends to a spooky palace. There Guddu spies on him and sees that he transforms into a ghost. Everyone is scared but Guddu asks them to perform. When they perform the special circus Bhatakna ends up laughing very hard and reveals his true form. Guddu asks him if he would eat them up, but Bhatakna denies and tells him that they have helped him come out of the curse that befell on him. He thanks them and goes towards heaven. Guddu and his friends find their vehicle ready to move!

In the next episode, Guddu and his friends solve an important mystery. Guddu is asleep when Chugli wakes him up and tells him that it is an emergency. Chugli tells Guddu that their Banyan tree is missing. The night before an artist had come and captured the tree in his vanishing gun. The tree then became a painting on his canvas. Guddu and his friends find the place of exhibition and search for their tree, they also find the crocodile’s home, the stream on one of the canvas. Jackwa, the painter, introduces himself. Just then Unteshwar appears and asks him to paint a huge waterfall on the canvas. Jackwa sets out to vanish one more gift of mother nature but Guddu and his friends stop him. Jackwa points the gun at Guddu’s friends and they all become a part of the painting. Guddu then beats up Jackwa and retrieves his friends as well as the waterfall, stream and the tree. He then breaks the mystery gun and shows Jackwa how to paint without it!

In the next episode, Guddu finds new fans in Pinku and Tinku who are Bagad and Billa in undercover. They try to become a part of Guddu’s group and serve them by doing their chores. One day on the order of their madam Billori, they prepare juice for Guddu. But Guddu misplaces it and his friends Giru, Veeru and Balloo drink it. They suffer from a disease that the doctor owl says is the legtodu disease. And it requires special medicine. When Guddu reaches the forest of Kanpur to retrieve the rare flowers that have medicine, he finds out that Bagad and Billa have stolen all flowers. Guddu follows them and asks them to give the flowers.

Guddu beats them up and takes the flowers from them but Bagad and Billa fail to realise that Guddu had already taken the flowers and cured Giru, Veeru, and Balloo. They all thrash Bagad and Billa. They hand them over to Inspector Rocky.

Game Of The Week: BoBoiBoy Galaxy Run Is The Perfect Game Mixing Simplicity And Adventure