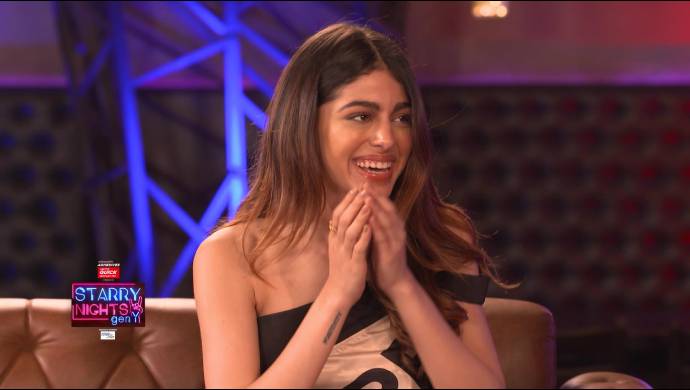 Starry Nights hosted by veteran journalist Komal Nahta is the most sought-after chat show. The incredibly fun show has completed two seasons and is currently running the course through its third, which is Starry Nights with Gen Y! Gen Y includes the young stars who have recently debuted or have tasted the wine of success in the last couple of years. These heartthrobs include the winner of Times Freshface Siddhant Chaturvedi who opened the doors of success with the film based on rapper of Mumbai, every teenager’s crush Vicky Kaushal, and the girl who has won hearts with her smile, Ananya Pandey. The guest of the latest episode was Alaya Furniturewala, the star kid who is glowing in the recent release of her film Jawani Jaaneman which also stars Saif Ali Khan and Tabu.

Watch Alaya’s quick wit and the way she pours out her secrets here.

Alaya is the daughter of Pooja Bedi and the granddaughter of veteran Bollywood actor Kabir Bedi. Being a star kid, Alaya dismissed the thought of nepotism and stated that the tag of the celebrity name always lingered as a brand even if the kids struggled to make their way through, which was true in her case as she had been preparing for her Bollywood debut for the last four years! Alaya revealed that she had been tutored to become a better actor and she had never had time to be on social media which made her detest the online hype. She plainly stated that even now that she is a celebrity, she still hates the oomph of social media.

Alaya went on to talk about herself in the Chill and Grill session and answered a few difficult questions with relative ease. Alaya received a heartwarming message from her grandfather and was seen getting emotional as she saw the video. The host also asked Alaya about her newly-hit celebrity status and how she is handling the fame, to which she replied that she is overwhelmed about everything these days and is trying to cope up with this warm feeling.

Jawaani Jaaneman’s producer Jay Shewakramani accompanied Alaya to the show. He talked about finding Alaya after a gruesome series of auditions. He also revealed that he has signed a three-film contract with Alaya. They played a rapid-fire game in which Alaya revealed that she would marry Vicky Kaushal, hookup with Sidhant Chaturvedi, and friendzone Kartik Aryan! The witty actress won our hearts with her punchlines.