Sherry marries Vishal but runs away from home in fear of her relatives. Trisha gets into trouble at the mall and is rescued by her ex-boyfriend! 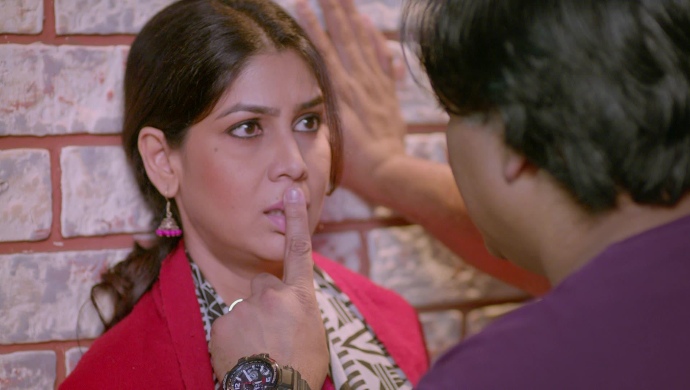 In the previous episode, Tipsy comes back from Vienna, Austria to Mumbai, India after 3 months because of Sherry’s call. Though she had settled into a new life abroad, Karan Khanna’s memories hadn’t left her thoughts. When she arrives, Sherry asks her to come to court in a hurry. Tipsy sees Sherry in a wedding saree and Karan with flower garlands and thinks that they’re getting married. Later, the misunderstanding is cleared when Karan’s best friend, Vishal marries Sherry!

In today’s episodes, it’s a bright morning but Karan is still lost in the meeting with Tipsy last night. He had gone to drop the latter home but couldn’t reveal to her that he stays with Radhika but in separate rooms. Tipsy is annoyed with Karan for constantly being after her when he knocks on her door to return her bag. The next morning, Tipsy gets a voice message from Sherry and calls up Karan immediately. She says that Sherry has run away with Vishal to hide from Chetti and Amma. Tipsy gets worked up and starts crying!

Karan tries to calm her down, and while at it, they share a few romantic moments. Vishal calls Tipsy and says that Sherry is refusing to come back. Karan knows the place where they are hiding and suggests that he and Tipsy go and bring them back. At the hotel, Karan devices a plan in the style of Dilwale Dulhaniya Le Jayenge (DDLJ) to convince Chetti that Vishal is a good south Indian boy. When Karan underestimates Chetti, Tipsy tells him that she won’t melt just because Karan is or was a superstar!

Radhika opens her boutique and throws a party to celebrate where Karan is not present. Trisha is at the mall when a product falls into her bag by mistake and she is accused of shoplifting. A rich man named Palash, who is also Radhika’s prosecutor, saves her by the time Karan arrives there. Later, Karan tries to tell Tipsy everything about his family and situation. Tipsy walks to back home and see a couple fighting with each other. A flashback of her past relationship washes in front of her eyes. Palash is in fact Tipsy’s ex-boyfriend!

Will this be a new problem in Karan and Tipsy’s equation? To find out, watch all the episodes of Karrle Tu Bhi Mohabbat, streaming now on ZEE5!

You can get all the live updates on Coronavirus on ZEE5 News section streaming now.

5 Scenes Of Rajkummar Rao From Bareilly Ki Barfi That Made Us Go, “Baaja Phad Diya Tum!”

Who's Your Daddy Review: A Dramedy That Will Keep You Guessing And Titillated