In tonight's episode, Aliya is dragging Prachi out of the house when Ranbir stops her and begins defending Prachi in front of everyone. 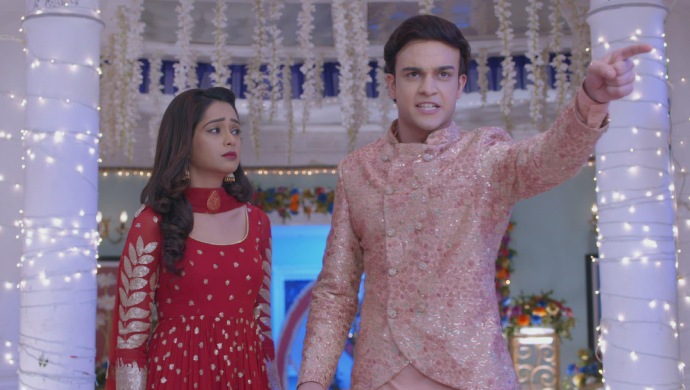 In the previous episode of Kumkum Bhagya, Abhi convinces Disha and Hritik to both come to the Mehra Mansion. Abhi and Purab pretend to fight so they don’t have to sit in the same car. Abhi takes Hritik with him and finds out Hritik likes Disha but she doesn’t like him. Purab asks Disha about Hritik but she refuses to answer. Disha leaves Purab’s car and goes away in a cab. Prachi comes downstairs and Aliya begins insulting her. Prachi says she can prove that she did nothing wrong.

In tonight’s episode, Prachi tries to tell Aliya that she will prove her innocence. Prachi explains that she was not feeling well and she slipped on Sanju. Aliya refuses to listen to Prachi’s excuses and wants to call up her mother. Prachi asks them to not involve Pragya in this. Priyanka gives her phone with Pragya’s number.

Pragya doesn’t answer Priyanka’s call because she gets out of her cab and sees Purab. When Shahana calls she ignores the call again because Purab is crying in the car. She asks him what is wrong and tries to talk to him. Abhi is also talking to Hritik about Disha. Hritik gets a call and says Disha is going home upset so her leaves Abhi’s car too.

Shahana goes looking for Abhi while Aliya scolds Prachi. Other guests at the party also feel Prachi was there just to trap rich guys. Rhea is afraid that Pragya will be insulted too if she comes home and asks them to stop. Aliya refuses to stop till she kicks Prachi out of the house. Ranbir stops Aliya saying he wants to tell something.

Shahana goes to Abhi’s room and is surprised that he is not there. Priyanka stops her and says that this is all her plan. Shahana gets angry and hits Priyanka with a vase. She tries to call Abhi from the landline phone but Priyanka cuts the telephone wire. Ranbir gives Prachi a kerchief to wipe her tears.

He then scolds Aliya and his own family for not standing up for Prachi. He calls them two-faced for praising Prachi and then not believing her. Rhea is shocked when Ranbir says he believes Prachi because she was talking to Sanju only because they are from the same town. Will Ranbir protect Prachi’s honour? Stay tuned to find out.