In tonight's episode, Prachi shows up at Ranbir's house with Maya and proves that she faked her own death to get Ranbir in trouble. 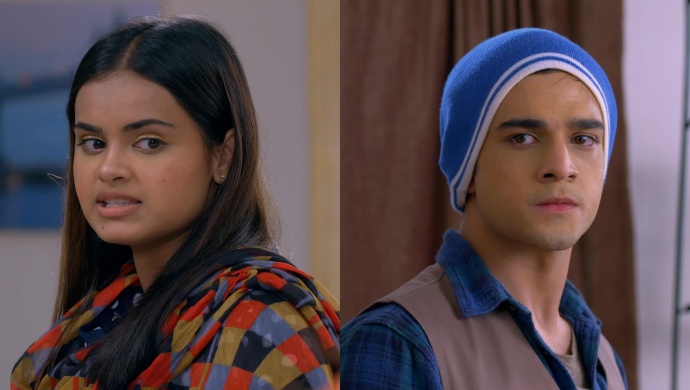 In the previous episode of Kumkum Bhagya, Abhi decides to go to the hotel where Ranbir is kept by the police. He asks Ranbir why he signed the confession letter. Ranbir says he got scared and doesn’t tell the actual reason which is to protect Prachi. Meanwhile, Prachi and Pragya find out Maya escaped from the room she was kept in. With help from Tujhse Hai Raabta‘s Kalyani they are able to catch up with her again. Abhi helps Ranbir escape from the police and come home. But the police reach Ranbir’s house and find Abhi hiding there. Abhi is arrested but Ranbir is left hidden.

In tonight’s episode, Pragya, Prachi, Shahana and Sarita all surround Maya and take her out of the hotel. Meanwhile, Maya’s family gets nervous because she is not answering her calls anymore. Her uncle tells Maya’s family that Maya faked her death to get to Ranbir but the plan went wrong when Ranbir got arrested instead of Prachi.

Ranbir blames himself for getting Abhi in trouble and putting him in jail. His mother convinces him to not do anything till the lawyer comes or they find another plan. Ranbir hides again when he hears the bell ring. His mother opens the door thinking it is the police but is shocked to find Pragya and her family standing with Maya at her doorstep.

Pragya enters the house and tells everyone that Maya faked her death to get Prachi in jail and marry Ranbir. Maya apologises to Ranbir’s family but they don’t forgive her. She then goes to Ranbir’s room and blames Prachi for making her jealous and faking her own death. Ranbir says he doesn’t want to be with Maya because he hates her and Prachi is much better than her.

Ranbir’s family decides to wait with Maya until their lawyer arrives and take her to the police station. Maya’s family calls her phone and get worried when she doesn’t answer. Ranbir goes out of his room to meet Prachi’s family. Maya turns to Prachi and says she will take revenge on Prachi eventually. Will Pragya succeed in getting Maya punished? Find out in the upcoming episodes.

Watch the new episodes of Kumkum Bhagya, streaming before TV on ZEE5.