In tonight's episode, Pragya takes Abhi out of the restaurant where they profess their love and Abhi asks Pragya to kiss him. 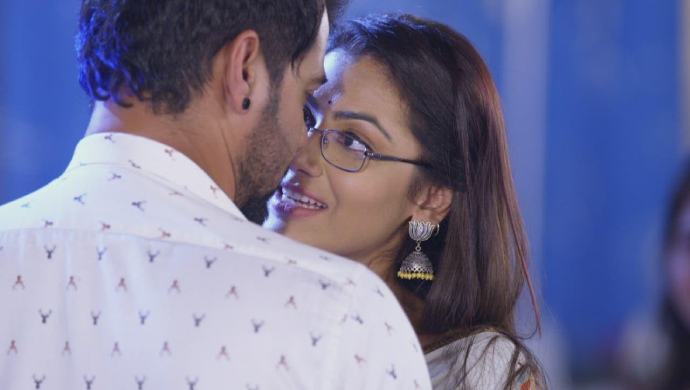 In the previous episode of Kumkum Bhagya, Rhea calls up Pragya asking to meet her. Pragya agrees to meet Rhea at the restaurant she wants. When Rhea meets Pragya, she complains about her mother who left her. She says Abhi will never understand. Abhi sees Rhea outside the restaurant and asks her why she is crying. Rhea asks Abhi to stop supporting her mother. However, Abhi tells her to stop talking badly about Pragya. Abhi goes to the restaurant and gets drunk. Abhi creates a scene and Pragya who is at the restaurant stops him.

In tonight’s episode, Abhi sees Pragya and hugs her immediately. She notices everyone at the restaurant looking at her. She stops hugging Abhi and scolds him for drinking. Abhi says he got drunk only because he was missing her. Pragya says she won;t leave Abhi anymore and takes him out of the restaurant.

Prachi goes to Vikram’s cabin and complains that Ranbir has taken everyone for a coffee break. She tells Vikram to be strict with Ranbir. When they go to the room, Prachi finds Ranbir throwing a party for one of their colleagues. Prachi apologises for being rude to Ranbir earlier.

Rhea is away from the restaurant by herself. She remembers what Aliya said about middle class women being problematic. She thinks about Prachi and what Priyanka’s plan was to get rid of Prachi. Purab reaches home and finds Aliya upset. He wonders if she wants to talk to him about something but Aliya says nothing.

Ranbir refuses to accept Prachi’s apology because she pushed him earlier. Prachi suggest that Ranbir push her and get even. Ranbir agrees to push her but stops at the last moment. He says that he doesn’t want to push her. Prachi suggests that now she and Ranbir can be friends. Ranbir accepts to be Prachi’s friend and takes her home.

Pragya is trying to take Abhi home. However she ends up going in circles because she cannot find his car. She goes in his pockets to find the key. Abhi laughs and pretends like Pragya is tickling him. He then asks Pragya to kiss him and say she loves him which Pragya happily does. Will Pragya decide to go with Abhi? Stay tuned to find out.