Mahira runs into Prithvi while she is looking for Sherlyn. Preeta, Srishti, and Sameer reach the hotel suite when Sherlyn is in the washroom. 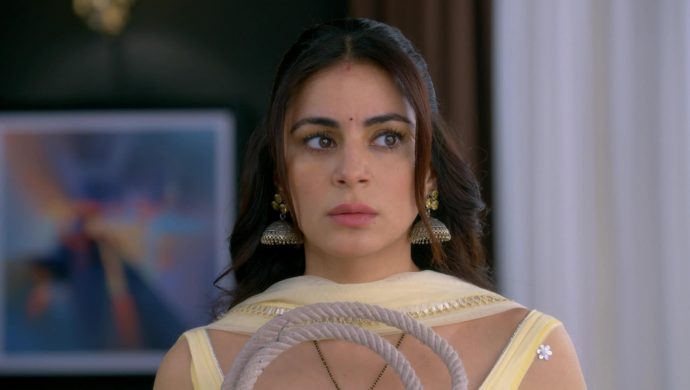 In the previous episode of Kundali Bhagya, Srishti and Sameer have come into the hotel, and together with the help of Preeta, are trying to find Rishabh Ji. Mahira has also come into the hotel after being suspicious of Sherlyn being in the hotel. Sherlyn has asked her to come to room 1110 so they could talk. While on her way to the room, Mahira gets a call from her mother and discusses her impending marriage and worries for Karan. Her mother suggests getting in touch with her dad, as he’s the one who has the resources and contacts to get Karan and Rishabh safely back in the house and in time for marriage. But this also means her dad could cause trouble in her marriage to Karan. Thinking about this, Mahira tells her mother that she will look for Karan herself, and would rather not involve her dad into the situation. When her mother asks her when everyone would be home, Mahira gets annoyed and cuts the call, going to look for Sherlyn.

Preeta, Srishti, and Sameer have finally reached the room and entered it using the master keycard. They don’t see anyone in the room. Preeta says in distress why no one is in the room as they were supposed to look in room 1011. Srishti corrects her saying they were supposed to check room 1110 and not 1011. They then leave to find room 1110. Sherlyn goes back into the room and tells Prithvi about Mahira following her and her suspicions about her knowing the masked kidnapper. She asks him to leave quickly before Mahira comes into the room. They remove the ropes around Rishabh and place him in a wheelchair. She checks if the coast is clear and then Prithvi rolls Rishabh out of the room. Sherlyn goes into the washroom to freshen up.

Finally, the three, Preeta, Srishti, and Sameer reach room 1110, while Sherlyn is in the washroom. They start looking all over the room but don’t find anyone. While they’re on their way to look in the washroom, Preeta notices the rope that was used to tie Rishabh to the chair. She realizes it’s the same rope that was used to tie her and Karan. They come to the realization that Rishabh was taken elsewhere, and the kidnappers might have seen the three looking for them. Preeta says there were two kidnappers, one with the mask and one wearing a helmet. Srishti then sees a glass with lipstick marks on it so they believe that a woman was also involved in the kidnapping, but didn’t show her face.

Prithvi is trying to get Rishabh out of the hotel without anyone noticing, and even puts a shawl around him from the laundry room to hide his face. He runs into Mahira and hurts her leg. To save suspicion, Prithvi says it is his grandmother who’s in the wheelchair, and Mahira running into her has hurt the old lady. He says she will curse Mahira as she has caused the old lady pain and she will never get married because of the curse. Mahira breaks down and starts apologizing by sitting on her knees and bowing her head. Prithvi pretends to be an old lady and gives her blessings after asking Mahira to keep her eyes closed. He accidentally says Karan’s name which makes Mahira doubtful. He covers it up saying she is famous as Karan is a famous cricketer, and the news of their marriage is all over the internet and news channels. They then part ways.

Preeta thinks back to when Karan had told her that the kidnapper was Prithvi, however, he didn’t have any proof. She asks the two why they suspected this room to be the kidnappers’. They tell her it was booked under Khurana industries, which made them suspicious. When told about Karan’s accusation on Prithvi, Preeta still doesn’t believe it would be him but the other two are almost sure that Karan could be right. At this point, Mahira reaches the room and starts ringing the bell outside, while calling out to Sherlyn. Rekha and Kareena have also reached the hotel and ask the receptionist if she’s seen, Karan. The receptionist is unable to find the register and says she’ll have to check with the staff at the previous shift for the information. Both the ladies leave the receptionist to look for the register, while they go look for Karan themselves. The receptionist tries to stop them but to no avail. She calls another staff member Rhea to check about the two and about the entry register.

Mahira continues ringing the bell, and Sherlyn is worried if Mahira asking for her would make Preeta realize that she was also a part of the kidnapping. We see Preeta talk to hotel staff and Srishti saying they have booked the room under the name of Khurana industries. It’s the same receptionist who Srishti and Sameer had talked to previously, with the receptionist accusing them of stealing the register. She also says that she was following two other ladies and then noticed the two of them so came over to check. We then see Mahira talking to a man in a different room asking for Sherlyn. The man denies having anyone named Sherlyn being in the room as he had booked it himself. On the other hand, Srishti and Sameer are busy denying the fact that they had stolen the register, and even try to call the Manager accusing the receptionist of blaming them for her fault of losing the register. This makes her apologize to them and leave immediately. After closing the door, Srishti confesses that she believes Prithvi is behind the kidnapping. Stay tuned to find out what happens next.

Kumkum Bhagya 20 July 2020 Preview: Is Prachi In Love With Ranbir?