In tonight's episode, Preeta is sitting by Mahesh's bedside. Karan is shocked when he enters the room and finds her there. 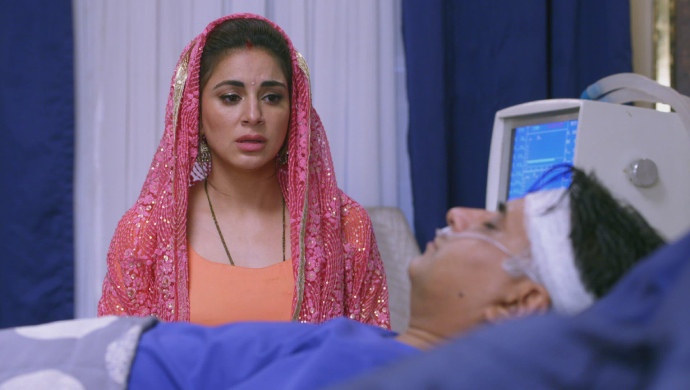 In the previous episode of Kundali Bhagya, Preeta goes to the Luthra house. She is afraid to enter in because Karan will kick her out again if he sees her there. Preeta joins a group of Giddha dancers who cover their faces when they enter the house. Karan sees them and feels like he recognises Preeta there. Sherlyn and Rishabh notice that Mahira has feelings for Karan. Srishti sees the Karva Chauth chunni in Preeta’s cupboard and becomes suspicious.

In tonight’s episode, Srishti answers the call from Renuka Sharma. She says that the interview with Preeta is postponed and will happen during Diwali. Srishti gets suspicious that Preeta is keeping a fast for Karan. Preeta wants to find out the truth and goes to the Luthra house.

She tells Sammy that she found Preeta’s lunch in her bedside drawer. She tells Sammy that Preeta must be in the Luthra house to break her fast by Karan’s hands. Sammy thinks this will be a fresh start for their relationship and looks for Preeta in the house. Preeta is in Mahesh’s room begging him to wake up and bless her.

She remembers how Mahesh had wanted to make Preeta his bahu before going into a coma. Srishti reaches the house but Kareena sees her there. Srishti says Kareena can make a big deal of it and ruin the dinner or they can ignore her and let her meet Sammy.

Prithvi also sneaks in wearing a ghungat to meet Sherlyn. She is talking to Mahira about Karan and ignores Prithvi at first. When Prithvi shows her a quick look at his face, Sherlyn gets excited. She leaves Mahira and goes with Prithvi. Sammy tells Srishti that Preeta must have hidden her face and joined the Giddha dancers.

Kareena sees Sherlyn and asks him to leave. She calls Sammy to the terrace to see the moon. Srishti also puts on a pallu to find the dancers. However none of them recognise her as the go to the terrace. Preeta is in Mahesh’s room when Karan enters in to check on his father. Will Karan recognise Preeta? Stay tuned to find out.