In tonight's episode, Mahira sees Karan and Preeta together and confronts them. Karan slaps Mahira after she slaps Preeta at the restaurant. 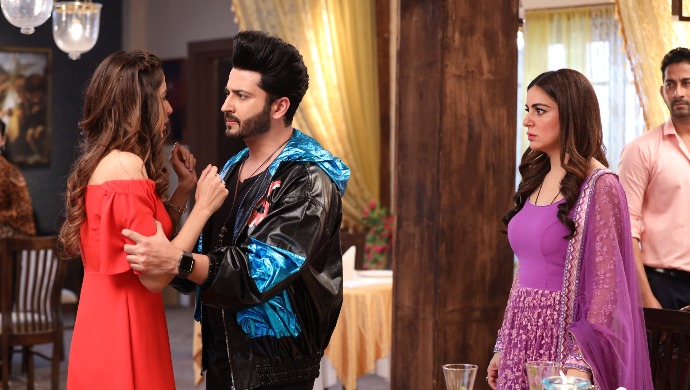 In the previous episode of Kundali Bhagya, Preeta dreams that Karan is in her bedroom and they both kiss. She wakes up smiling when she realises that it was a dream. Karan promises to go for Mahira’s party but much later. He goes to the training centre and finds Preeta talking to another cricketer. Karan takes Preeta aside and goes to a restaurant. Mahira calls up Karan to find out why he is late, but she hears Preeta on the call. Mahira leaves her party to find out if Karan and Preeta are out on a date.

In tonight’s episode, Mahira goes to the restaurant where Karan says he is and finds him with Karan. Preeta asks Karan if he really plans to marry Mahira. Karan tells Preeta that he cannot marry Mahira because he is married to Preeta. Mahira gets angry at Preeta and slaps her, asking her to stay away from Karan. Seeing this Karan gets angry and slaps Mahira in return. He asks her to leave right then.

This is what Sherlyn imagines will happen when Mahira sees Karan with Preeta. She feels that her own plan will get exposed if Mahira upsets Karan. She calls up Mahira and asks her to return to the party before she does something stupid to ruin their entire plan. Mahira listens to Sherlyn and leaves the restaurant.

Karan eats the extra spicy pasta that Preeta ordered and his mouth is burning. Preeta feeds him honey and water before bringing him a cold drink. Karan looks lovingly at Preeta while one photographer clicks his photo. Karan asks the photographer to delete the photo right then. Sherlyn tell Mahira that Karan is only close to Preeta because she looks weak and always needs his help.

She tells Mahira that that she needs to look weak in front of Karan and beg for his help to get Karan with her. Mahira calls Karan and asks him to come to the party because her friends have put a bet saying he will not show up. She tells Karan that she is waiting for him on the ninth floor. Karan still doesn’t leave his date with Preeta. Will Karan go to meet Mahira? Find out in the next episode.