Lubna Salim talks about bringing hope and positivity through Bhalla Calling Bhalla, and reveals similarities between her life and the show. 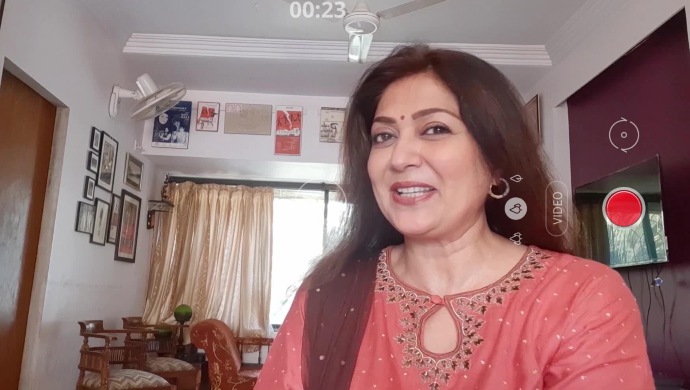 Lubna Salim plays the role of Lovely Bhalla in Bhalla Calling Bhalla. This unique lockdown special series was created during the time of social distancing and tells the story of the Bhalla family under lockdown. Lubna talks to us about going from doing Instagram lives to shooting for an entire web series, under lockdown. She also explains how much this new process affected her as an actress.

How did you happen to come on board for this show?

I count myself really lucky that I got to be part of such a series. When they approached me, I was in talks to do something similar with some other people but nothing concrete came from that. I was skeptical if this could happen either, but then after a few days they asked me to keep dates aside for this show. In three days we were ready to begin.

What were the challenges you faced in make a show during the lockdown?

I needed to take help from my husband Salim, who is luckily a film director, because this is a professional series not an Instagram live session. I think even the other actors got help from people they were living with. We used three mobile phones in every scene because one is the dummy phone, one I was shooting with, and one for the script.

How did you prepare for the role of Lovely Bhalla?

Oh yeah! So one thing happening in my own life is that my son is studying in the USA. He is taken care of, but that paranoia is there because we are on video call daily. He also calls us asking me how to make garam masala, or how to make Indian food. So while I was preparing to play Lovely Bhalla, this was one thing I really could relate to because her whole family is living away from her. Then I took Deven’s advice and used my own observations on how to play the Gurgaon woman who loves kitty parties, and is an over-the-top snob sometimes.

How did you manage to collaborate with the other actors?

This is the most difficult part made easy for us. It’s hard to improvise when you do act face to face with your co-stars. With Rajesh Kumar and Gaurav Gera as co-stars, I really wanted to do my best. Our director, Deven Munjal, made it really simple for us. He would send us clips of the person who shot their scene before us so we can do our lines according to that. I would also give two-three different takes for them to pick the best one. Now it’s reached the point where Deven tells us to stand in front of this window walk from this table to another corner. He jokes that he knows our houses better than we do.

What was the best part and the worst part about working in a series like this?

The best part of the show is that the hope is still there, the positivity is still there. In these adverse times this show will bring joy to people at home. I’ve realised that it’s just not about requiring your staff around, your timings, or even make-up to the extent we have today. I have started wondering how much of that we really require.

The most irritating thing is the number of re-takes because there’s not enough light. I had to set the bedsheet or dab the sweat. I realised the importance of the little things that are taken care of on the set for you. I never thought my house would become a set. I feel like I’m living in a set now.

How much of a struggle was it to find humour in such a dark time?

We have no choice now. In such times we need something to lift our spirits. I understand it’s very difficult to deal with what’s happening in the world outside but we have to move on and emerge stronger.

Do you feel this show will inspire other creators to put out similar series?

I’m certain it will bring some change in how we create shows. People were hung up on needing the perfect lighting or the perfect shot. Once you are out of these things that trap you, who can stop you. You are free! We didn’t even work with a DSLR camera, just our mobile phones. There have been trials and errors but we stuck at it and it’s turned out quite good.

Firstly because they have nothing better to do! The best thing to happen to them is watching Bhalla Calling Bhalla. It’s really entertaining. It’s relatable to every family. The quirkiness of the characters. And lastly, it will teach you to value relationships!

Watch the first four episodes of Bhalla Calling Bhalla, streaming on ZEE5 and watch out for the next four dropping on 25th May and the last four on 30th May.

Watch 'Mentalhood' starring Karisma Kapoor as a modern mother in her digital debut, streaming on ZEE5

Happy Birthday Kunal Kemmu: The Actor Who Aced In Comedies And Psychological Thrillers