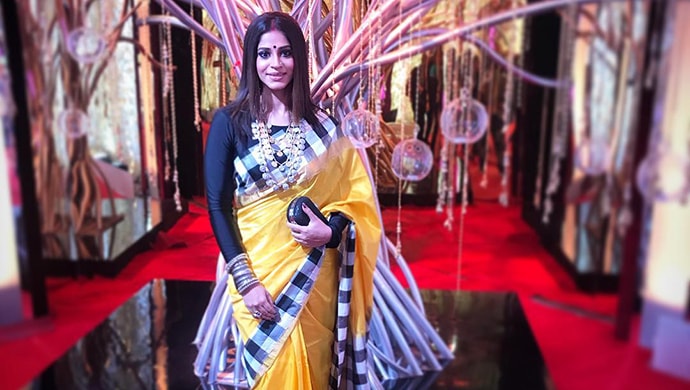 Actress Shweta Mahadik, who plays Durga Jindal on Guddan-Tumse Na Ho Payega, has been getting a lot of attention. It is not only her performance, even her style that has gotten many talking. On the show, Durga is seen in statement neckpieces which you will be very tempted to own. However, there was one look the actress sported on the Zee TV show which has been the best one so far. Check out her avatar at 18: 51 in the episode below:

Durga’s Diwali look reminded us of the time when Anushka Sharma wore something similar at her Delhi wedding reception. The Jindal bahu dazzled in a bright red Banarasi saree, teaming it with heavy Kundan jewellery that made her look very regal. The loose bun and red roses completed her classic look. Check out the picture below:

I don’t think Indian brides feel complete without wearing the colour red in one of their functions. Anushka decided to wear red on her reception. And much to my absolute delight, it would be a red Benarasi saree. From the by-lanes of Peeli Kothi in Benaras. I was particularly excited about this look because I have seen an entire generation of Bengali women getting married in red Benarasi sarees. The red bindi, the sindoor and the mogras in her hair just made the look more potent and powerful. She chose to wear heritage uncut diamond choker and jhumkas from the Sabyasachi Bridal Jewelry collection. Bollywood can play a major role in spreading awareness about Indian textiles and handlooms. And I must say the occasion couldn’t be better. I know copies of this saree will flood the entire country in the next few months to come, which also means that a million weaver’s children will be back at school. All I can say is thank you Anushka! Virat chose to complement his new bride in a very subtle and elegant manner. He wore a black textured silk signature bandhgala with the house buttons in 18k gold and a white silk kurta with hand-woven brocade churidaar. He teamed it with mojris from the Sabyasachi accessories line and a hand-embroidered antique Pashmina shawl from our ‘Kashmir Revival’ project. @anushkasharma @virat.kohli @bridesofsabyasachi @groomsofsabyasachi @tajdiplomaticenclave For all jewellery related queries, kindly contact sabyasachijewelry@sabyasachi.com #Sabyasachi #TheWorldOfSabyasachi #SabyasachiJewelry #AnushkaSharmaViratKohliReception #Virushka #AnushkaSharma #ViratKohli

Coming back to the show, though Shweta’s character might not be on good terms with Guddan, she has been a great example as a daughter-in-law. She runs the Jindal household effortlessly, so kudos to her! Her character Durga Jindal might come across as a strict one, but don’t you love her when she helps Guddan in various situations? You can watch more glimpses of her act in the episodes available on ZEE5.

Is there any one thing about Durga Jindal that you love the most? Comment in the section below.