Tamannaah Bhatia-Shruti Hassan discusss how rumours of them being a couple began, Bollywood celebs they want to be with under lockdown and more. 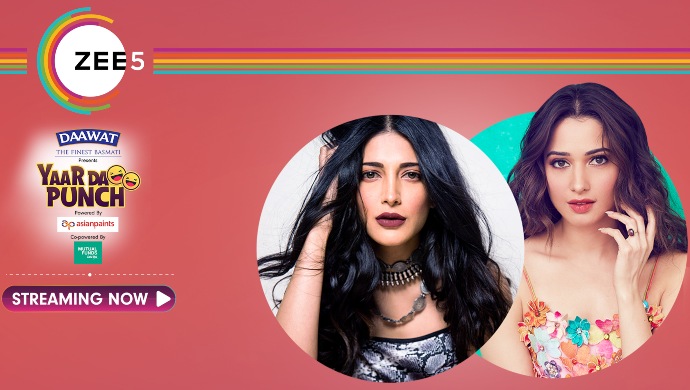 Tamannah Bhatia and Shruti Haasan are one of the few actresses to make their mark in films across languages including Hindi, Tamil and Telugu cinema. These talented actors not only stay in the same neighbourhood but they are also close friends. They are such close friends that some people in the industry began assuming that the two are a couple! In this interview with Komal Nahta, they talk more about their friendship and discuss their lives under lockdown.

In this episode, Komal Nahta admits he was surprised when he found out that Tamannah and Shruti were such close friends. He asks them when their friendship started. Shruti and Tamannah had gone to each other’s birthday parties and they really hit it off since then. Tamannah mentions that since both of them are part of any dating rumours and they were seen whispering and talking to each other during an awards function, people in the industry and magazine began believing rumours that they are both a couple in real life, which is not true at all.

Tamannah and Shruti both agree that they are completely opposite personalities but they get along very well together. Shruti Haasan also mentions that she sang a song for Tamannah in her latest Hindi film, Khamoshi with Prabhudeva, before going on to sing one of her own original songs that she sang and composed.

When Shruti Haasan was asked about the Bollywood actors she wants to be with under lockdown,  she admits that Bollywood heroes are not her type. Komal Nahta plays a fun quiz where he asks them questions like three other words for making love, three words for Tamannah and some more mental math questions in which Shruti claims their ‘Shame-shame-poppy-shame’ moment happened. Watch more of this funny and lively conversation on ZEE5.

Secret Out: Niki Walia, Zain Imam, Javed Tell Us If They've Ever Kissed Their Best Friend