Taapsee Pannu and Ayushmann Khurrana talk about their life and work during the lockdown as well as their friendship throughout their careers. 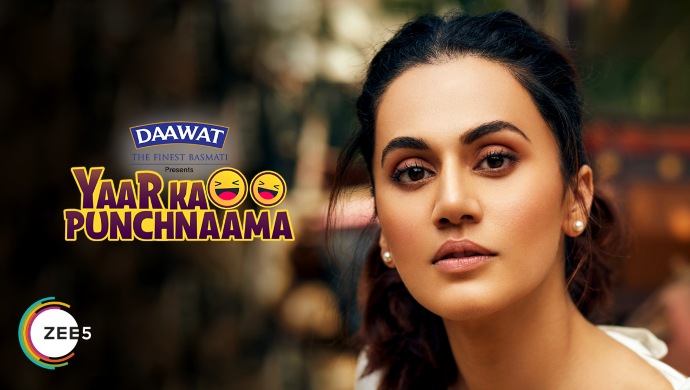 The similarities between Ayushmann Khurrana and Taapsee Pannu are evident when the host Komal Nahta interviews them as the ‘The Male Taapsee Pannu’ and ‘Female Ayushmann Khurrana’, respectively. Both these actors have defined the past decade of Hindi cinema but this this the first time they are seen on screen together in Yaar Ka Punchnama. Their camaraderie makes the first episode of this chat show a brilliant watch.

Komal Mahta begins the chat by saying that they cannot use the word ‘lockdown’ anymore because everyone is tired of hearing it. Both Ayushmann Khurrana and Taapsee Pannu choose to use the words ‘lock-up’ or ‘jail’. Both Taapsee and Ayushmann reveal that they have been doing script readings on Zoom nowadays. Taapsee says that she has learnt to cook during the lockdown. Ayushmann Khurrana has begun washing his own car, and he is living with a cook during the lockdown.

Komal Nahta mentioned that Ayushmann Khurrana brought his cook from Chandigarh during his struggle days too. Ayushmann said he cannot struggle on an empty stomach. Talking about her own struggle days, Taapsee Pannu said she never had to struggle. She didn’t do too many auditions because her career went from ads to Telugu and Tamil films and then to Hindi films.

Taapsee also reveals how she met Ayushmann Khurrana for the first time after seeing him in Vicky Donor. She complimented him for his acting and he responded to her like she was another fan. Since then, their friendship grew strong by “giving each other critics’ choice awards” at award functions. Ayushmann also says that he feels Anubhav Sinha will be the person to bring him and Taapsee together in the same film.

Taapsee and Ayushmann also play a fun rapid fire round where Ayushmann correctly guesses that Taapsee did Judwaa 2 without reading the script. Talking about the more serious aspect of the lock-up, Ayushmann mentions that while discussing films and ideas, everything feels up in the air right now. Taapsee shares a similar anxiety about not knowing when they can get back to work again.

Watch this funny and insightful episode into the lives of two iconic modern actors in Hindi films on ZEE5.